The Possibility of International Solidarity

This short blog is dedicated to the small group of researchers interested in Chinese labour who, led by Ellen Friedman, had an amazing one-week labour tour in New York. Certainly these are only my personal reflections drawn from some of the meetings, but the whole group’s discussions with American workers gave me some ideas for this paper.

To be quite honest, I had great doubt about international solidarity after attending the Labour Notes Conference in Chicago in May 2012. It was great to attend such a big activist event, to know about the great difficulties facing American workers; however, in most panels that I went to, I faced some harsh questions like: ‘why have Chinese workers taken away our jobs?’ Being an obvious yellow face among angry participants, I lacked the courage to explain that their jobs were taken away by global capitalists, not by Chinese workers. The Chinese workers just happened to be the ones who can satisfy capitalists’ demand for cheap labour at the moment; in other words, it might be Vietnamese or Cambodian workers in the future, as long as they can provide an even cheaper labour force. I have to admit that I had been completely unable to believe in international solidarity since being intimidated by American workers on that occasion. Therefore, when Ellen Friedman asked me again to join a labour tour in New York after the International Labour Process Conference at Rutgers University, I had some reservations at first. However, the experience of this labour tour in “the Big Apple” turned out to be very positive. I realised that the possibility of international solidarity built upon openness to mutual understanding is a very slow process, but I saw the possibility blossoming on this trip.

I didn’t expect American workers to be so curious about Chinese workers. In almost every meeting we were asked about how Chinese workers organise strikes without trade unions, without legal protection. American workers told us that although they have a quite comprehensive labour law, and established trade unions, they are not in a better position than Chinese workers. In terms of labour law, there are still many grey areas, and the company either hire ‘smart lawyers’ to undermine workers’ interests or use every possible ‘dirty trick’ to destroy workers’ solidarity. In terms of unions, they told us unions can never present every bit of the workers’ interests. It is workers themselves who give strength to the union, not union officials. In response we told them that in China, workers don’t have unions to work for them, they have to rely on themselves to organise strikes. It is difficult for American workers to comprehend that in China, though workers have the biggest trade union in the world, the All China Federation of Trade Unions (ACFTU), this union does not act on behalf of workers’ rights. All the strikes in China that American workers have heard about are so-called wild-cat strikes, which means not organised by trade unions. As I reflected while I was listening to the American workers, I realised that the scenario that Chinese workers are facing now, to a small degree, is similar to American workers’ wish to have a more ‘democratic’ union instead of a ‘bureaucratic’ union. Certainly union and democracy are norms only; the truth is that both American and Chinese workers have to stand up to fight for themselves, and in this regard American workers shared their experiences with us.

When we were in the CWA labour class, they showed us the contract they have negotiated with several companies in the north-east, which is as thick as a book. This detailed contract is their pride and joy; they fought for every clause to defend their members’ rights. The forming of this contract is the result of more than 55,000 worker’s strikes, struggles and bargaining with bosses. The contract keeps growing: whenever there is a small grey area, they will demand that the boss agree to clarify it in clear writing. I am totally amazed by this: the labour contract in China is only a piece of paper, sometime it’s even a piece of blank paper because workers didn’t know they have to sign the contract. Moreover, the labour contract in China was designed by the government and employer. Workers ironically were left out of the process of designing or modifying the contract: this is the big difference between American and Chinese workers. Another striking point to me arose when we asked workers’ representatives from a Cablevision union, ‘How do you form solidarity among your colleagues?’ They told us that the vision of workers’ leaders has to go beyond increased wages. It is not easy to form a collective action either in the States or in China, because whether American or Chinese, everybody fights for his/her own interests. The way to turn human nature to solidarity is to tell co-workers that whatever the injustice the company has done, will not only affect a small group of workers but the workers as a whole. After the meeting I casually asked one worker’s representative, ‘How does your family feel about you spending your time on your co-workers?’ He told me, ‘My son and little daughter are always with me when I go to talk with our co-workers, they live with our movement.’

After hearing that, I do wish that the participants of all these exchanges with American workers were not only scholars or students who do research on Chinese labour, but Chinese workers themselves. Maybe this is only a pipe dream, but the beginning of international solidarity is to understand each other. It is good that these groups of American workers were happy to share their experiences with us, but more crucial is to create a dialogue between them and Chinese workers. Certainly there are a lot of hurdles in the way of this dream dialogue: languages, ideology, government pressures, cultural differences … the list can go on and on, but one never knows; we had not thought of communicating with American workers freely but we did this time. There is hope on the horizon; but I believe it is only when workers from different parts of the world can overcome the obstacles to mutual understanding that international solidarity will grow. 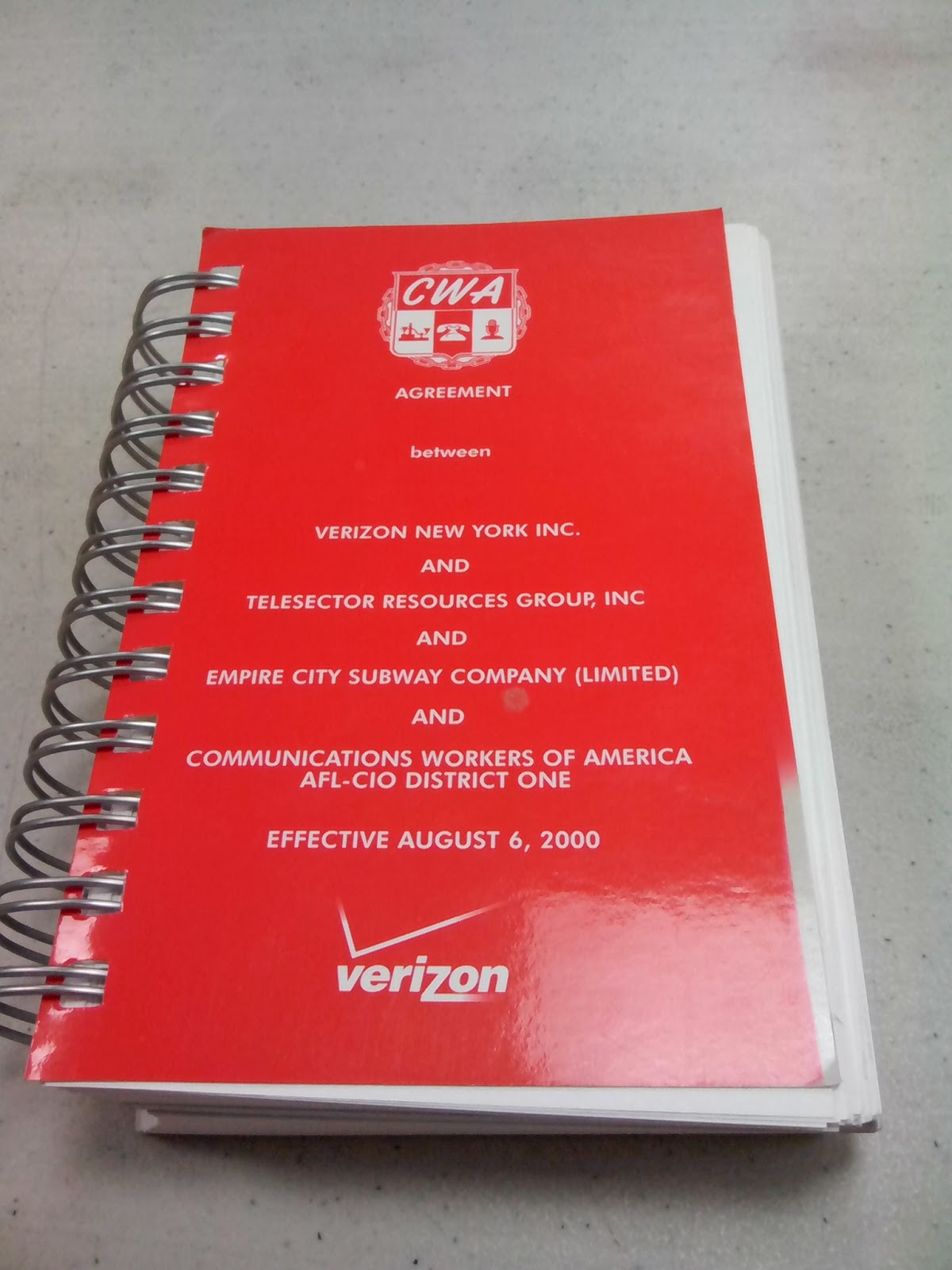 The contract between CWA and many companies. 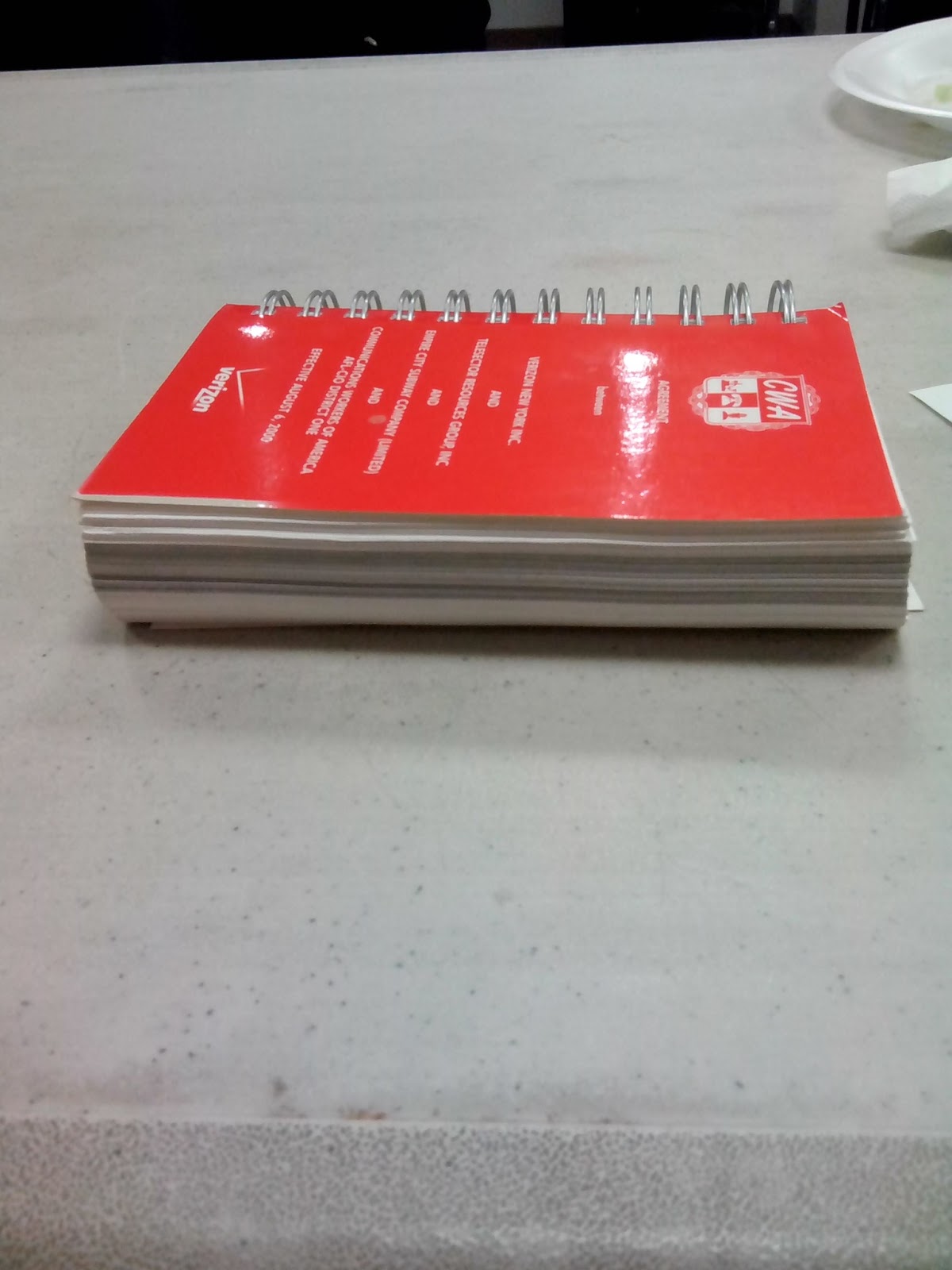 The contract is as thick as a book!