Recovered Factories in Argentina: on the thought of Chinese workers

For me, the most rewarding thing about attending the Second ISA Forum of Sociology in Buenos Aires was not stationing myself inside the conference room and enjoying scholarly debates, but to walk out from the university and discover a total new world of recovered factories.

I followed Prof. Pun Ngai and her students to visit a printing factory in the wintry rain outside Buenos Aires. The factory only has eight workers. From the outside, it looks like any normal printing factory. After we learned a bit of its history, I realised that this is one of the ‘recovered factories’. Right after the financial crackdown in 2001,[1] the factory was abandoned by its owner in 2002. The boss left all the machines behind. However, the factory workers didn’t go along with the boss; on the contrary, they took over the factory and started to run the business by themselves. From April to October 2002, policemen were constantly stationed outside the factory and required the workers to leave, but the workers ignored this intimidation. They started to run businesses, started to do management work; they transformed themselves from workers into managers. So far, this factory has been run by the workers for more than a decade, one worker told us, and the business is not bad.

Before going to this factory, I had never heard of recovered factories. We met up with Prof. Andrés Ruggeri from the university of Buenos Aires at this printing factory, and he explained to us about the history of recovered factories; it is a common phenomenon in Argentina where it is known as Worker-Recovered Enterprises (Empresas Recuperadas por sus Trabajadores, or ERT). These factories are mostly located within metropolitan Buenos Aires; the majority of the ERTs in the interior of the country are concentrated in the most industrialized areas of the provinces of Santa Fe and Córdoba.[2] According to Ruggeri, before 2003, there were thirty to forty recovered factories; after 2004, there were one hundred and sixty recovered factories, and the number increased to two hundred and thirty by 2012. Most of these factories are small and medium size enterprises (SMEs). Without the boss, workers are obliged to start self-management. As Ruggeri said, they are forced to choose this long and risky road because of their circumstances and the impossibility of doing anything else other than take their future into their own hands.

Hearing about and witnessing the recovered factories encouraged me a lot. Two thoughts emerged. The first one is, if the Argentine model of recovered factories can run along well, doesn’t it signify the possibility of a solidarity economy against a capital economy? Secondly and unavoidably I thought of similar scenarios of abandoned factories in China, especially in the southern part of China. After the 2008 financial crisis, many furniture or toy factories closed down abruptly, and bosses fled, leaving empty factories and groups of unpaid and simultaneously unemployed workers. I wondered why the Chinese workers cannot stand up to take over their factories like their Argentine comrades. The following part aims to discuss these two questions.

Although looking into the statistics, the number of recovered factories is increasing, according to Ruggeri, it doesn’t mean that the cooperative model could be flourishing in Argentina. There are several problems for workers who try to self-manage factories. The first and foremost one is to enable manual workers to do management work. In the past, manual workers just needed to run the machines, but now they have to consider budgets, marketing, in other words, to take over boss’s responsibilities. It is not easy for workers to do a management job, mainly because they don’t have equivalent training. The second challenge is to maintain machines or to buy new ones. Machinery maintenance requires lots of capital input, which most recovered factories can’t afford. More importantly, in the view of the law, those workers don’t legitimately ‘own’ the factories; therefore they can’t ask banks for loans to increase their capital. The third challenge also relates to those workers’ legal status. By law, those workers are self-employed, therefore they can’t have family subsidies from the state or social insurance; they are a group of de jure employers but de facto employees. Apart from those legal problems, recovered factories also face the challenge of recruiting new blood. Although the factory workers laughed when we asked them whether they would give an ‘ideological test’ when they recruit new members, it is not easy for them to recruit newcomers in the competitive capitalist world. As Ruggeri said, those workers with highly specialized skills, who had the chance to market their skills somewhere else, tended to abandon the self-managed firm in light of higher salaries in competing firms. Finding it difficult to recruit young and better-skilled workers, needless to say, the hidden but fundamental problem for recovered factories is continuity of operation. Maintaining the factories’ inner democracy is another challenge. Ruggeri pointed out that in some recovered factories, workers unavoidably have to hire some contracted workers, therefore it is a constant struggle for those recovered factories to maintain smooth production, while recruiting new people and being as democratic as possible in management.

Despite all the difficulties that recovered factories have faced. I thought of implanting the Argentine model of recovered factories into China, and I’m sure in the group of visitors to that printing factory, I wasn’t the only one to have this thought. When I met with Ruggeri later for more exchanges, I realised that my naïve thought might not be practical. The most significant difference between recovered factories in Argentina and most factories in China is workers’ residences. In Argentina, most workers are local people, therefore when they are fired, they have family and friendship networks to support them to build up a solitary network. Whereas in China, most factories are in coastal areas and workers are migrants from the hinterland. Those migrant workers have much less kinship or friendship in the cities to support them in taking over the factories, not to mention that the Chinese hukou system[3] deprives migrant workers of basic living needs in the cities. Therefore, by their nature, Chinese workers in industrial areas have much less power than their Argentine counterparts. Secondly, the essence of production is also different. In China, most abandoned factories are in the business of processing trade for assembling. The processing trade requires lots of cheap labour, therefore most Chinese SME factories have averagely fifty to one hundred workers. This number also impeded workers from uniting together to occupy the abandoned factories; at least it is much more difficult to reach a decision than it is among ten or fifteen workers.

However, the impression of Argentine recovered factories is still great; it at least provided an alternative choice. It might not be practical to apply in China, but perhaps next time when I have fieldwork in China, I can tell Chinese workers or labour NGOs about Argentine workers’ bravery and resistance to capitalism. 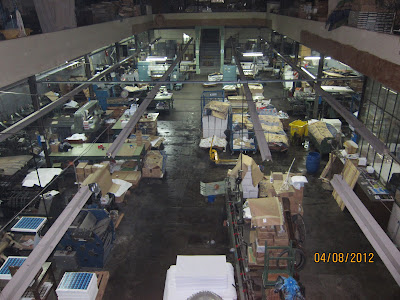 Small factory with only eight workers, who have run this factory by themselves since 2004.

[1] The Argentine financial crisis lasted from 1999 to 2002. The blame for this crisis fell mainly on the government’s bad decisions on financial policies, especially on the currency’s exchange rate with the U.S. dollar, and also the failure of the neo-liberal experiment. Augusto de la Torre et al., ‘Argentina’s Financial Crisis: Floating Money, Sinking Banking’, http://www.econ.umn.edu/~tkehoe/classes/Schmukler.pdf accessed on 30/08/2012.

[2] Andrés Ruggeri, PhD (Faculty of Philosophy and Letters, University of Buenos Aires), ‘The Worker-Recovered Enterprises in Argentina: The Political and Socio-economic Challenges of Self-Management’, translated by Marcelo Vieta.

[3] The hukou system  is also known as the household registration system, which means that migrant workers don’t have citizenship in the cities where they work, they are less likely to be covered by medical insurance and certainly they face greater exposure to hazardous working environments: Rachel Murphy, ‘Introduction: Labour Migration and Social Development in China’, in Rachel Murphy, ed. (2009), Labour Migration and Social Development in Contemporary China, London: Routledge, p. 5.
Posted by Unknown at 03:16