On 24 September, the iPhone 5 was launched in the first nine countries/areas, America, United Kingdom, France, Germany, Canada, Singapore, Japan, Australia, Hong Kong. It will go on to be launched in 22 more countries in the week beginning 1 October. The first weekend’s sales were very impressive, reaching 5 million. This number already broke Apple’s previous record for first-weekend sales of all previous models of iPhone. I wonder, when all those Apple fans are camping outside to be ‘the first customer’ or at least ‘first group of customers’ to buy the iPhone 5, has any of the fans thought about the making of this most advanced, light, cool gadget? This paper links the hot-selling phenomenon of the iPhone 5 to the Chinese workers, for the very reason that most of Apple’s iProducts are manufactured in China.

Every time when I use my mobile, my friends make disapproving remarks: ‘Why are you still using such an old-fashioned mobile? You are always on the move so you should get yourself an iPhone.’ I thought the function of a mobile was to call and text people when one is on the move. I agree that smart phones seems to make life easier in this internet-connected world, but why does it have to be an iPhone? My friend who works in a hi-technology company in Taipei told me: ‘Because the iPhone represents a life-style, you are different from other people because you have an iPhone, or put in another way, you belong to a certain group because you have an iPhone.’ After seeing the first launch weekend of iPhone 5, recorded sales of five million, and long waiting lines outside shops on the streets of London, New York, Hong Kong and Tokyo, I finally understood the meaning of my friend’s words. Those five million people (actually even more, because many others didn’t manage to buy iPhone 5 on the first weekend because of limited supply from Apple) all believe that they are in a certain group, advanced and globally connected online all the time, the group of the Information Elite. I guess very few of this Information Elite group’s members will look closely at the making of Apple’s iProducts, the majority of which come from a giant assembling factory, Foxconn in China.

Foxconn workers are not unknown to the world. In late May 2010, Foxconn faced a string of thirteen workers’ suicides in the southern part of Shenzhen. The death toll of Foxconn workers finally reached seventeen between 2007 and 2010. Foxconn, which was founded in 1974, belongs to Hon Hai technology group, a Taiwanese-owned giant contract electronic manufacturer which produces devices for Apple’s iProducts, Dell and Hewlett-Packard. Foxconn is a leader in design, manufacturing and after-sales services for computer, communication and consumer-electronics companies; it has 420,000 employees in Shenzhen, in the southern part of China, 300,000 of them at Longhua factory. As a Taiwanese processing company, Foxconn is by far the biggest in China, with more than 820,000 employees. Furthermore, the Hon Hai Technology group has factories around the globe, for instance, in the Czech Republic, Hungry, Slovakia, India, Mexico, Malaysia and Brazil.

Because of the string of suicide cases, Foxconn became iconic for scholars working on Chinese labour. The most famous is the work of Prof. Pun Ngai’s team on Foxconn workers, published in book form as ‘To Survive, Foxconn Workers’ (in Chinese活下來, 富士康工人). There is also a documentary film about Foxconn workers by Ivan Franceschini (a PhD candidate at the Ca’ Foscari University of Venice) and Tommaso Facchin (a freelance translator and documentarist), called Dreamwork China. I was moved deeply by this book and documentary before I went to China in May this year, so I made an effort to meet some Foxconn workers in Shenzhen.

After I chatted with some workers at Foxconn, I realised how young and inexperienced they actually are. Like many of my Information Elite group’s friends, they have their dreams. Most of them are 18–25 years old, which is certainly an age to have dreams about the future. Nevertheless, their life at Foxconn is very boring, with endless day and night shifts. One may argue that it is the reality that workers spend their working life with machines: there is not much fun in those kinds of jobs. I agree, different jobs have different contents, but I would argue, Foxconn workers’ life actually represent the greatest alienation from their production. They produced all the iProducts, but when I asked them, “Would you like to buy an iPhone or iPad?”, they shook their heads shyly: that is impossible on their wages. Those young people also have smart phones, but they are ‘fakes’, copied from branded models. They told me the functions of ‘faked’ smart phones are quite similar to real ones, and the price is much more affordable. Certainly one may also argue that this is an appalling infringement of copyright, but if Apple only share 1.8% of the profits with the Chinese workforce when they sell an iPhone and 2% when they sell an iPad, how could one expect millions of Chinese workers to pursue their online dream with genuine iProducts?

More importantly, workers in Foxconn are not passively accepting their excessive working hours and low wages. There have been many strikes in different Foxconn factories, the most recent being at Taiyuan, the capital of Shanxi province in the North of China. The Taiyuan unrest only lasted for around 24 hours and it is claimed as a management problem. However, the timing of the protest coincidentally clashed with the launch of the iPhone 5. When I consulted the Human Resource Manager at Longhua Foxconn Factory, he told me that before each launch schedule, workers and factories endured great pressure to meet the deadlines. Though so far there is no report about what kind of agreement was reached between workers and management at the Taiyuan Foxconn factory, certainly workers knew that by protesting at this crucial moment they would increase their bargaining power. This point actually expands on what Eli Friedman argued in his seminal paper, ‘Insurgency and Institutionalisation: The Polanyian Countermovement and Chinese Labour Politics’ (forthcoming in Theory & Society). Friedman observes in his paper that workers(from Naihai Honda Strike) have realised that as soon as they stop their work on the production line, management will immediately look into the problem. Millions of Information Elite groups might not care about far-away Chinese labourers down there in some unknown factories; however, when the Apple fans cannot get their hands on iProducts because those Chinese workers simply walk out of their factories, it would be a problem. Therefore, can the Chinese workers eat Apple? 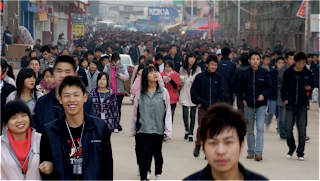